Don’t Buy Another Money Making Course Until You Read This 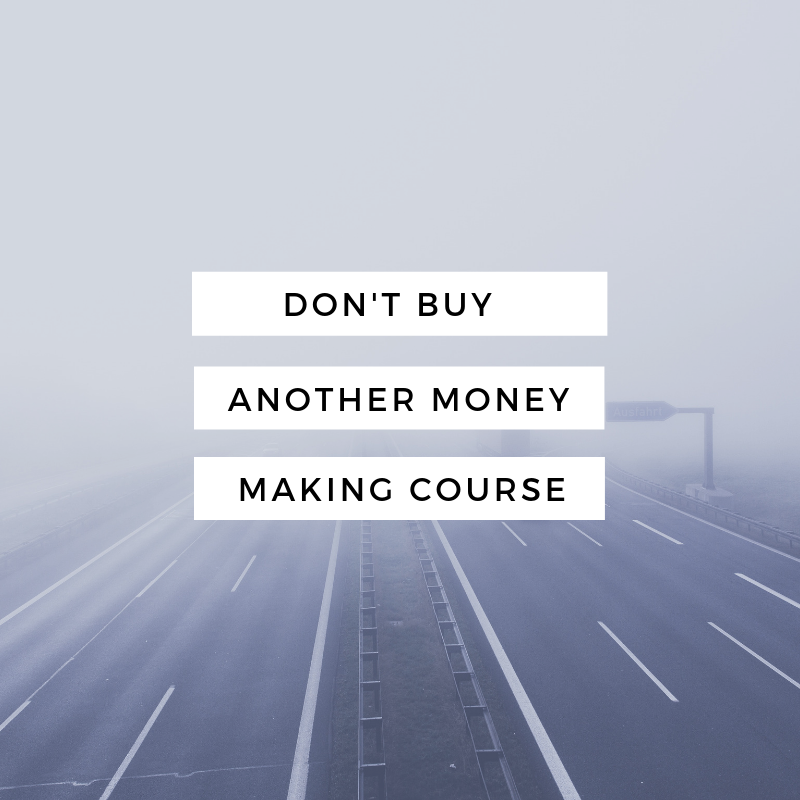 The Lazy Person’s Guide to Enlightment

Many courses and programs make attractive promises about how to make money. It is often an entrepreneur who talks about his or her own story. They tell you they started with nothing but succeeded in their filed. They introduce their money making course where they are going to show you exactly how they did it so that you too can be rich. It is a huge industry.

So how is this related to enlightenment?

The problem with talking about enlightenment and spiritual growth is that it is sometimes seen as an ‘alternative’ or ‘new age’. Some people think such an idea has no place in business or wealth building.

I suppose I had the same problem.

For years, I could not see the parallels or the relationship between enlightenment and profit producing business activities.

My interest in spiritual growth and personal development started in my early twenties around the same time I was trying to build a business.

But the more I sought inner peace and harmony, the further I got from my business to thrive. Because in those days, I was mixing with spiritual people who were far from being wealthy. They talked about being one with nature and promoting universal harmony.

Once you experience this ‘oneness’ you know that is the gateway to enlightenment.

The problem was I always felt there was a conflict within myself for wanting to sustain that state of being and wanting to attract wealth.

When the idea of the law of attraction came about though the book of The Secret, we realised that it was not a secret at all. We knew all along how the universe worked. But a lot of us did not ask for wealth to come to us. This was because we felt it was a self-centred act.

So the conflict remained between wanting wealth and wanting enlightenment.

That is because we have lived with a mindset that wanting money equals being greedy. This then naturally became my own limiting belief. As soon as I made some money I either lost it by doing something silly with it or spent it so that I was back in the same place. Being poor. Because I believed albeit subconsciously, that by being selfless and poor, I would attain enlightenment.

For many years, I listened to wealthy people talk, read books on creating wealth and did all the affirmations that they said I needed to do on a daily basis to attract wealth.

I signed up to many money making courses which promised to show exactly how they became extremely wealthy in a matter of months.

‘Wow, that must be what I need to be doing’, I thought.

‘Yes making some investment into this course is okay because I am going to get it back many times more when I am rich’. Because all the business gurus say, you have to invest in yourself etc.

So the internal dialogue went on.

Another case of Shiny Object Syndrome

It is also called SOS, Shiny Object Syndrome that many entrepreneurs suffer. You see a promise of your dream coming true. The people selling money making courses or tools tell you that it took them years to learn this but now they are going to share exactly how. So that you can get results more quickly. Usually by buying the information at a price. In other words a promise of a shortcut to success.

Then you think, ‘yeah, if I buy this I will get there much more quickly and I will be living my dream life just like this person in a matter of months if not weeks!’. Because you think that you are buying a formula that gets you to where you want to be. A formula you think that works just like a mathematical equation.

You imagine it a bit like following a cooking recipe. You get all the ingredients of success by buying this course and Ooh la la, there should be the end result of you being rich beyond your dreams.

I have done this, too.

But do you know what?

It did not happen to me. I spent the money, followed the money making course, took actions and waited for the result.

But the result was nothing extraordinary.

And I know this is not a unique story. This is the same story for the majority of people who buy those promises and supposedly a formula for success. In fact, it is as many as 95% who don’t see any change in their life according to studies.

Daniel Priestley who shares so much wisdom in all of his books says in Key Person of Influence, “You hear a story about a newly made millionaire who’s achieving success in an industry you know little about. The assumption you may wrongly make is that it was the ‘thing’ that made the money.”

I had to go back to re-searching my soul and sought wisdom for the answer.

The answer I got was obvious.

Why didn’t I think of that?

I knew it all along. I just had been ignoring that message. How foolish of me.

The answer was there all the time. I just didn’t notice it.

It’s a bit like when you are sitting by the roadside watching cars go by. You have been counting how many blue cars there are driving past because you thought that was the answer to your problem. Meanwhile, you had not taken any notice of the red cars at all. But there sure were many red cars that went by. You just were not taking any notice of them. Because you had been focusing on the wrong colour!

A similar thing happens with romantic relationships. You wonder why you have not had much luck with your relationships over the years. And you come to realise you have been fancying totally wrong type of people. When you finally meet the right person, you might realise actually this is not that unique. You find that actually, this type of people had always been around. It’s just you had not been notcing them as a possible romantic partner before. In other words, your frequency was different.

Anyway, that is another story and another article.

So back to the red cars.

What I discovered, I had known all along. But I had not taken it seriously as the answer to my problems.

What I realised was I thought I bought a formula to be my solution to my problem. I tried to resolve my problem with money and the action that went with it.

But the reality was that it was not that ‘money making course’ that was missing from my life.

The missing ingredient was me being in the state of being where I could accept success. I was thinking small. I was focusing on making money. That is what I was focusing on instead of the total harmony with the universal energy. Exactly what learned about enlightenment.

That is when the wisdom kicked in and taught me this.

When I have proved the value of my service only then I will receive the value in return. And that value must NOT be for my own personal gain. It must be in the best interest of all concerned.

I recently watched a webinar of someone who claims themselves as an abundance coach who was selling her own training course. Everything she was saying about channelling the energy in the right way to attract abundant wealth was right. That is what I believe how the universe works.

But I also know that it is not the act of buying this training program that is going to make it happen. Equally, I believe that the idea of attracting financial abundance to yourself so that you can buy your dream house and dream cars is outdated.

They look for collective abundance impacting more than just your immediate family. People want to act in a socially responsible way so that every one of us benefits from the abundant universe.

It is only by learning how to realign yourself to the universe and tune into the energy that you will change something and it has to start with you.

That will not happen automatically by just reading a book, attending a course or meditating for a couple hours a day. Remember, Buddha meditated for 49 days to receive enlightenment?

Not all of us have spare 49 days and we will soon get hungry or be compelled to check our phone for updates anyway.

If by buying a program or tools, you can transform your life, everyone will be doing that and everyone who bought this kind of money making courses would be wealthy by now.

That’s why I work with people who want to work on themselves first to transform their life instead of looking for a simple formula. By going through this transformation process, and learning to live the way of adapted ancient Japanese philosophy, you will not only find yourself with inner harmony and peace but also you will find your own ‘thing’ on your journey. A thing that is going to turn into the ‘value’ you have been looking for.

This value might be more time, fulfilment, a sense of belonging, a passion or money, however you define what success is. It will come to you more easily.

By changing your mindset and your belief system about wealth, success and happiness, that’s when you will start seeing positive changes to your life.

Only by instilling this belief as your way of life on a daily basis that the transformation you are about to experience will become permanent.

You will find that there are more doors of opportunities in front of you and you start attracting and meeting people who will help you take you higher. You will discover that you had the answer in you all along. It just needed uncovering.

Therefore, the process is called dis-covering of yourself.

method is designed for a busy and distracting life. It is a practical solution to living life with inner peace and happiness to attract an abundance of wealth and success. Yumi teaches people how to direct energy and change frequency to be in harmony with the universal force by adopting ancient Japanese philosophy as a way of life. This transformation lasts permanently because it is a life long skill.

Any cookies that may not be particularly necessary for the website to function and is used specifically to collect user personal data via analytics, ads, other embedded contents are termed as non-necessary cookies. It is mandatory to procure user consent prior to running these cookies on your website.