Is Mindfulness At School The Answer To Better Mental Health? 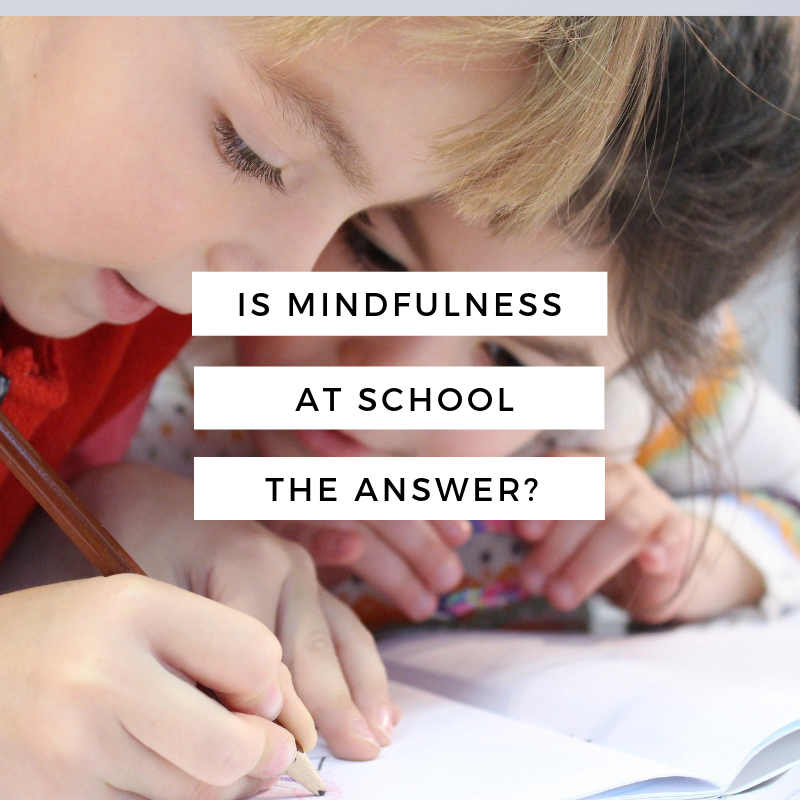 The Department of Education announced that they aim to introduce mindfulness and meditation techniques in schools as part of one of the largest studies in the world. The study will last until 2021 involving children from 370 schools in England. They will test the effectiveness of the different approaches to support and improve children’s mental health.

As a mother and a grandmother, I celebrate this move by the Government in principle. I have always felt that we have been too slow to recognise the importance of mental health in children. We are too quick to try to eliminate the symptoms of illness or disorder rather than investigate the real cause, which might lie within our psyche. Parents have relied on medications to suppress the discomfort, instead of exploring the root of the discomfort itself. We have been looking far too long at individual solutions to individual ailments rather than looking at the body and the mind as a whole.

I worry that the Government’s plans to test the effectiveness of various methods such as mindfulness to improve children’s mental health is flawed. I am concerned that mindfulness at school is simply another way to test which methods eliminate the symptoms in the best way. If so, they are missing the whole point.

Of course, making meditation as part of the daily practice may help everyone. That is why adults have taken up the habit by millions in recent years. Even large corporations see the benefits in encouraging their employees to have these quiet times to themselves while at work.

Studies have shown the health benefits of meditation and mindfulness, which include reduced blood pressure, easing the symptoms of anxiety and depression in employees as well as improvements in employee engagement, focus and performance.

But mindfulness or meditation or whatever you want to call it, it is basically a practice of self-awareness.

Long ago, perhaps before the technologies have transformed our lives, self-awareness was not a luxury. It had been practised by a few wise people.

I come from a county where self-awareness is instilled from an early age. I would not for a moment say that Japan does not have its own social problems. In Japan like many other developed countries, have issues with bullying at school and suicides of young people.

But there are things Japan does very differently. I still believe they play an important part in developing children to become well-adjusted members of the society.

I would describe this ‘politeness’ to stem from being self-aware.

In Japan, it normally starts early and it is formally practised at school from the primary age group. The school is the ideal institution to model a society where children have to learn and work alongside other people. And that is where learning to be self-aware starts.

Just to introduce a couple of examples that have been done for years; in Japan, it is a normal practice for all children to clean their own classroom at the end of each day before they go home.

In order for collective cleaning to take place effectively, each child is responsible for putting their belongings away and keeping the area tidy. This gives an opportunity for each child whose turn it is to clean the classroom to learn how annoying it is if someone does not clear up after themselves. In turn, they learn not to annoy others in the same way. As a result, developing compassion for others.

They don’t just clean their classrooms. Instead of having dinner ladies/men, the children serve lunch for each other. Serving food for each other and tidy up after lunch together is a normal daily routine for all children in Japan.

I found this Video clip below to share with you which shows some school children cleaning and serving lunch.

This is not the Japanese Government’s attempt to save money by not employing cleaning and school dinner staff. These small acts of daily routines are actually playing an important role in each child’s development. Basically teaching mindfulness at school but in a different way.

They teach self-awareness and compassion.

They teach how their own conduct affects others in the class and therefore in turn how it affects themselves.

The children are learning how each other’s behaviour causes others to feel in a certain way. They learn to put themselves in other people’s shoes and to adjust their own behaviour through this learning.

This teaching makes them quite self-aware and they learn how they play an important part in their society in school as an individual. They experience that their contribution to that society is valued because they value others too.

It seems simple but it is not hard to see how highly effective it is. It can influence how they grow up to become a member of the larger society later on. I feel my three children may have benefited from this experience.

We can recall the press reporting Japanese people’s calm and resilience after the major earthquake and tsunami in 2011 when people were queuing patiently for hours for essentials instead of looting.

Many people might remember more recent articles highlighting Japanese people’s ‘politeness’ after Japan’s defeat against Belgium in the 2018 World Cup. As if, it was a complete surprise when the tearful fans stayed behind to clear up the stadium and the team left the locker room clean and tidy.

We want to live in a society where that happens all the time, right?

I remember visiting many numbers of schools as a prospect parent at different stages of my children’s development. My visit included notable private schools where affluent families send their children to. They pay thousands of Pounds each term for their children to be educated there. Sometimes I was horrified to see the messy corridors with their belongings that included a sock, a shoe, a piece of a textbook on the floor. I could not see the correlation between their academic performance and the level of children’s conduct as a member of the school community. I don’t know whether they taught mindfulness at that school though.

Being self-aware keeps you grounded and at peace with oneself. Being self-aware is now a ‘skill’ that should be learned not just for your own well-being but to support the  of others around you, the family, the community, and the society as a whole.

I hope you enjoyed reading the article. Please share your thoughts by commenting below!

method is designed for busy and distracting life. It is a practical solution to living life with inner peace and happiness to attract an abundance of wealth and success. Yumi teaches people how to direct energy and change frequency to be in harmony with the universal force by adopting ancient Japanese philosophy as a way of life. This transformation lasts permanently because it is a life long skill.

Any cookies that may not be particularly necessary for the website to function and is used specifically to collect user personal data via analytics, ads, other embedded contents are termed as non-necessary cookies. It is mandatory to procure user consent prior to running these cookies on your website.